I didn’t plan to write a book, I just found myself writing one — a collection of eight short stories, with motherhood as the central theme.

It started with this post that eventually became a six-part short story series. Long story short, sometimes I think I was blackmailed by my family into writing this book. At other times I think, O well….

And so began this journey that has lasted over a year (mostly because I had no idea what I was getting into from the beginning. Although I had a very loose idea of what I was looking for).

When the Bible talks of Abraham looking for a city built by God…. I’ve gained a new perspective on its meaning!

I needed a title for the book. It wasn’t until I turned to God though, that I got it. Another reminder that God still answers prayers.

Also, I had to go and have my photo taken because they won’t let me use a selfie. I know… I know…. They have a point, but I’m a homebody that hates to go out unless it’s absolutely necessary. And my question was, “Whether I use a selfie or a studio photo, is it not still me that’s in the photo?”

I can almost hear my sister’s response after figuring out I’d been sending her selfies, seeking her opinion on which photo to use.

“Wait o, are you taking these pictures with your phone?”

“And so what? Is it not still me that’s in the picture?”

And then, I needed a cover for the book.

The whole time, my gut feeling was to do the design by myself, but you know how the experts on these things say we’re supposed to resist the temptation to design our own book covers, or else it would look too DIY?

Well, I listened, and spent resources I now feel sorry for.

After months of working with two different designers, I finally decided to go with my gut feeling.

I wanted the design to look like something “Mother” would do. Hopefully, this design is not too far from that…. 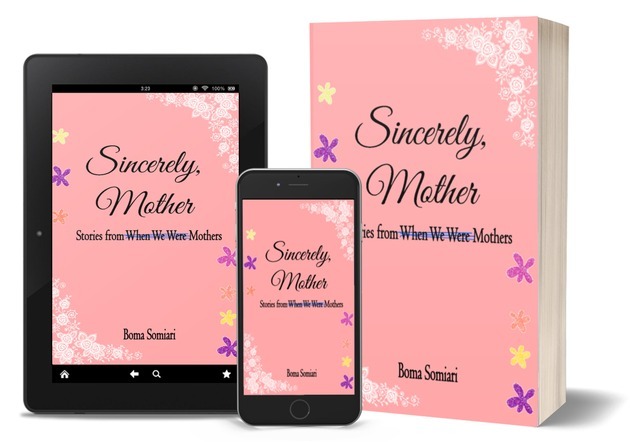 Then, there was the publishing part. I’m self-publishing. I’ve always been intrigued by the indie part of any industry, and have always leaned towards indie-anything.

But then I found out that in Nigeria, where I’m currently based, there’s not much support or service available to self publishers. I found out the minimum quantity most businesses would let you order is five hundred copies. The optimal quantity it seems, is a thousand copies. As I’m not exactly looking to have stacks of hundreds of this book stored somewhere (And because I won’t be allowed to just give away the whole thing), it wasn’t an option I wanted to look into further.

And we can’t use most of the popular services from here (except through third parties, or something like that).

So I was just going to publish the ebook until I find what could work. But just when I decided, I heard back from a book seller that had requested a review copy earlier. And it seemed to me like we were back to where we started, with the print copies challenge….

I could go on, and on, and on…. Like, sometimes I think it’s a good thing I didn’t even know what I was getting into or I might not have started, in the first place.

But progress has been made, and we’re here now. Ready to publish.

Lessons have been learned.

And a path mapped out.

The story is still unfolding….

So here’s saying thank you for your support and encouragement this whole time. May you be watered, as you have watered.

You can read excerpts from three of the stories, using the links below.

(I’ve used the first lines of the stories as titles here because… OK, I’d say it… the stories are without titles yet! I know…. I know…. I should listen to my sister and be serious, especially as the ebook would be publishing this week. On Friday, at most).

All I’d wanted was just a quiet Sunday at church

When you do a social media post, you do not expect your boss to read it

Not that hard to seeOne boy’s response to being bullied at school. Follow the story as he does his best to deal with the unfolding situation.

Freedom?Freedom beckoned, and anything was better than this death she was living. But what would Rebecca choose?

FoundSeeing beyond your fears is not always the easiest thing to do. This short story follows Naomi as she faces her fears and discovers that home was never that far away.

Sincerely, MotherEight short stories to encourage and remind you that you are not alone. As long as you are doing the best you can, you are doing alright, mama.

My Bible Study Journal Choose from a variety of Bible Study Printables for use in your personal Bible studies.

Bible verse bookmarksChoose from a variety of bookmarks.

My Bible Study Journal (Cursive)Choose from a variety of Bible Study Printables for use in your personal Bible studies.
Scroll back to top
error: